News from the last year. Contests and agents, and book deals, oh my!

It's hard to believe it has been a year since my last post... so much for my New Year's Resolution of blogging more!

But it has been quite a roller coaster of a year for me! The short version is writing new books, participating in Pitch to Publication, querying, reading, traveling, getting an agent, and getting a book deal. You want the long version you say? Well sit back, relax, maybe grab a snack, and read on. (I'm a writer, this may get lengthy.)

Me in Disney World:

As far as writing, I know I did a lot of revising on BLUE TIDE and decided it was time to submit to agents. I entered a few writing contest, #PitMad, PitchWars, Pitch to Publication. Some I didn't get into but one I did: Pitch to Publication. Pitch to Publication is a writing contest for completed manuscripts who submit their query + 5 pages to one of 15 highly sought-after freelance editors. The editors select one (in rare cases, two) authors to work with! The writer/editor team work closely for a month, getting the manuscript as polished as possible. After the editing round, the entries go to the agent round!! Agents then can make full manuscript requests on any of the entries they choose. Out of all the entries, BLUE TIDE was chosen by editor Lara Williard. (She is an awesome editor and I love her blog about writing.)  After a month of intensive edits with Lara and her other mentee, Joe. BLUE TIDE was as polished as I'd ever hoped it could be. It was finally ready for the agent round.

I was lucky to have a few requests from the agent round. After months (years) of hard work, it was utterly surreal to see agents requesting to read BLUE TIDE. One of the agents, Rebecca Angus, only requested two manuscripts from all of the amazing entries. One of those requests was mine, I sent it over to her right away. But then I waited. And waited. And waited. Maybe broke down and had a peek at her Twitter, where everything she tweeted could have been about BLUE TIDE. 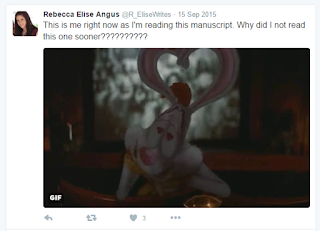 And then the next morning I woke up to an email with the subject line "Offer of rep"where she said she pulled an all-nighter to finish BLUE TIDE because she couldn't stop reading, and that she wants to have "The Call" with me but wanted to put her hat in the ring ASAP because she had the feeling once I inform other agents that I have an offer, that I would get other offers as well and that she was prepared to arm wrestle other agents for my manuscript.

So we scheduled a call the next day, where it was everything I thought it would be. Our vision for BLUE TIDE was identical and she didn't want to change a thing. I really clicked with her and wanted to give her a YES right then and there. I gave the other agents that had my full the customary time frame but ultimately, I signed with Rebecca!

Rebecca has been my dream agent from the start. She is so quick to get back to me about things and was there every step of the way through the nerve racking submission process... which leads us to the next chapter of our story....

This is where we get to the roller coaster of the story! After signing with Rebecca, we did some (more) minor edits on BLUE TIDE then she prepped it for submission. In November, BLUE TIDE was sent off to publishers. Everything happened in a blur. We got a lot of awesome responses very quickly... but then the waiting set it. And then the holidays where the publishing world seemed to stand still. But then in February, we were offered an amazing three book deal. I am proud to announce, BLUE TIDE will be released Winter 2017. A prequel novella will be released sometime before that and the sequel to BLUE TIDE will be TBD. I was pleasantly surprised my publisher wanted a sequel to BLUE TIDE. I originally wrote it as a stand alone (though it did have series potential) so I am very excited to be able to remain in Lux and Draven's world a little longer.

I cannot wait to share BLUE TIDE with everyone. It is has been my baby and I hope you like it as much as I do!

Then, add BLUE TIDE to your Goodreads to-read shelf now.

I can't thank everyone enough. My readers, beta-readers, friends, critique partners, bloggers, editor, agent, anyone who has supported me.... for making my dream a reality. As we speak, there is a ton of exciting BLUE TIDE stuff happening that I can't wait to share with you. Be sure to sign up for my mailing list to stay up to date. You can also join my "Crew" if you really want to support me and be in the know. I will also be going on tour BLUE TIDE after the release. My tour will be international (Middle East, woo hoo!) so stay tuned to see if I'm coming to a city near you.

Posted by Unknown at 3:17 PM No comments: